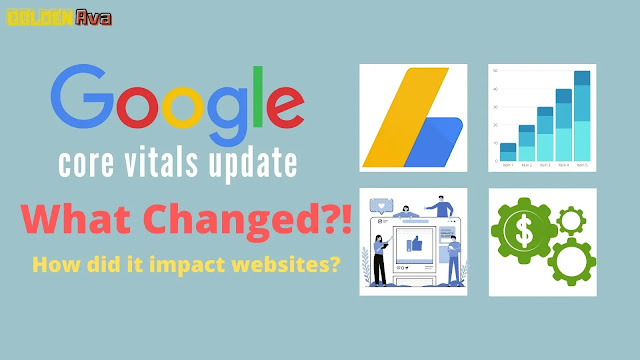 There was a Google core algorithm update called Google Core Vitals Update as many of you know that started rolling out december 3rd and we waited several days to let things settle a little bit in the serp to see what things are actually happening on the traffic.

On a servey conducted by Income School on december 9th, where 242 independent bloggers said that their websites were affected by this update and they got us some really cool numbers.

Now i have to say, if you see any data here that's very different than what you're seeing on many of the large SEO blogs, it's because the entire survey is conducted on independent bloggers and publishers, no e-commerce sites or service websites and stuff like that; so this is just about independent bloggers.

How Much Traffic was Lost?

Because on many of the updates over the last several years, it's been about relevancy and reducing spam but actually they're just rolling out more serp features that are taking traffic away from some publishers.

I went to Mozcast which does a great job tracking this and there really was no incidents of more serp features or fewer features or even change serp features when this algorithm update was released; so this is probably not one where Google is taking traffic but we want to dig a little deeper and see what exactly happened, this is where the story starts to take a little bit of a turn for us.

Small Websites: It's again about 50% / 50% Not statistically significant.

So the story has gotten a lot thicker now, at first we said 50% up and 50% down in general bloggers, we didn't lose traffic but now given the fact that these sites are large and they consequently have more traffic than the small ones overall, we as independent bloggers and publishers, we lost traffic on this update on average  -17%  and that's not good.

what did google change?

That's what we all want to know so let's go get a little bit more data see if we can start drawing some conclusions: we look at SEMrush Sensor and i just don't see a particular category that was hit more than others i; i looked through quite a few of the news articles on this, several of them saying: "it impacted finance and medical sites more" but i'm not convinced that's true for independent bloggers and publishers, i don't see that data bearing out not within the realm of just normal variants and as we looked through individual sites and niches there are no particular sector that was hit by this update.

What do i change if i went down? and what did i do that was so good, if i went up? As we look through individual sites, this is where it really becomes difficult to start drawing conclusions and here's why:

On many Google updates, they'll even just tell us what changed or as we start looking through data it becomes pretty obvious what changed, so i think there's something in Google's core update guidance that could answer our question.

If you go and read that post -Google's core update guidance- there is one line in there that i think directly is impacted by the things that we saw on sites that were changed: "Is the content mass-produced by or outsourced to a large number of creators or spread across a large network of sites so that individual pages or sites don't get as much attention or care?".

Now, we look at that data and we say it wasn't the small bloggers that got hit, it wasn't the medium bloggers that really saw much of a change at all, it was the big ones. As the site gets larger and larger, it's more common for an independent creator to start outsourcing at large and they become very busy as the content creators and they're already getting income and so they stop putting life into their websites.

It's very interesting that Google specifically are calling out the number of creators on their update guidance. The New York Times for example has a lot of creators on the website and if traffic is going away from us independent publishers and going to large organizations which we presume -i mean it had to go somewhere-.

Why Did Traffic Volumes Change?!

I think it's because there is life behind those websites just like there's life behind a small website that's usually written by the individual creator and a medium website but as that site gets larger we stop really editing it, we stop putting as much into the content because we're rank for everything so if i had to boil this down to one conclusion and my estimation as we've looked through hundreds of websites now, it's this: If you want to grow a large website you can do it just like before, i mean we saw a huge percentage of people that their traffic went up even with large websites but the core difference is there was something that Google was measuring that said that those sites have life behind them; they are getting edited and have no stylistic issues or spelling issues, they have social media mentions.

I really think this is about life behind the content so that it is more reliable and continue to grow and to do well on google's algorithms.